Nazlin completed her BA in Political Science and Economics at the University of Calgary, and went on to study law at the University of Victoria. Her concentration was in commercial litigation but her interest in mediation was also sparked during her time at law school, when she undertook some ADR training.

During law school, Nazlin was awarded summer service scholarships – first to Freeman & Company, Vancouver, and then in her final year to Simmons & Simmons, London, England. Her tenure at these firms gave her hands-on experience with a diverse variety of corporate commercial matters and types of litigation, the latter including a matter heard at the House of Lords.

Nazlin was called to the Bar of British Columbia in 1990. She articled with Farris & Company before practicing with a variety of firms in Vancouver. She is currently a litigation support and research lawyer at Lakhani & Company.

Nazlin was appointed a member of the Ismaili Conciliation and Arbitration Board (CAB) of BC from 1996- 99, and was then the Member for Legal Matters on the Ismaili National Council for Canada. She has continued to take on cases for mediation as an alumni member of CAB, largely in the areas of commercial and estate law. Nazlin has developed a particular interest in the principles of ethical mediation and has presented on the topic.

In 2020, Nazlin was selected and trained as a member of the first Ismaili Arbitration Board for Canada and is now also a qualified arbitrator.

Nazlin was born in Kampala, Uganda. She loves travel, reads widely (especially if the areas of history, biography and philosophy) and also enjoys pottery, gemmology and gardening. 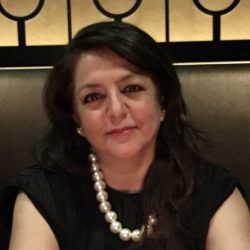