Joanna is a graduate from the Master of Arts in Conflict Analysis program with Royal Roads University with a goal of working in conflict management initiatives in British Columbia. After graduating with a Bachelor of Arts in History and French Language from the University of British Columbia in 2010, Joanna worked abroad for a number of years first in England then in France. Joanna currently works in the financial aid office at the University of British Columbia where she manage the Indigenous student financial advising team. Joanna also sits on the board for Community Integrated Services Society and mentors young athletes through the Climb and Conquer organization.

Originally from Vancouver Island, Joanna and her partner now live in Vancouver where we they full advantage of the outdoors by skiing, cycling and rock climbing. 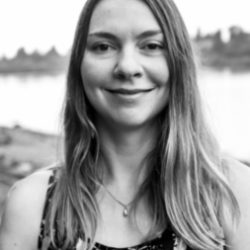