Fisnik Kumnova is a Project Manager with more than 8 years of experience in Project Management and Conflict Resolution. He works with ADR Institute of BC as Business Manager, responsible for strategic planning and project management. Currently, he is pursuing his MA in Interdisciplinary Studies at Royal Roads University in Victoria BC. Prior of joining ADR Institute of BC as Business Manager, he has been working as Financial Reviewer at SFU, consultant for BC Hydro, Asset and Investment Department and worked as Business Development Advisor for a local company in Burnaby, BC.

Some of the projects he managed are: ADR Mediation Centre Mitrovica, which he managed for more than 4 years together with CSSP, in Kosovo; Bridging the Divide,M-M@G Project – an online web magazine which reported stories from conflicting areas in Balkans, in three languages; Business Advisory Center Mitrovica, which helped create more than 50 Small and Medium Enterprises (SMEs); Support for Kosovo Young Leaders Program, where he trained youth from 7 municipalities in Basic Negotiation Skills.

He is an Alumni of International Institute for Political and Economic Studies 2008, organized by George Washington University, Washington DC and The Fund for American Studies. He is a volunteer for ADR Institute of BC where he assists in organizing ADRBC Symposium 2019. He is a passionate reader and likes sightseeing. 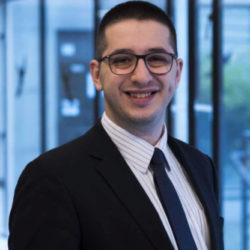