He is the Dean of Candido Mendes University Masters in Law and Fellow of the Chartered Institute of Arbitrators. 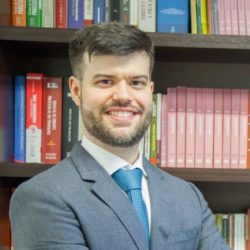