Leah George-Wilson was the first woman to be elected Chief of the Tsleil-Waututh Nation in 2001.  She served 2001-2003, and 2005-2009.  Leah holds a bachelor’s degree in Anthropology from Simon Fraser.  Upon graduation, she began working for the Tsleil-Waututh Nation in 1992 as a Researcher and in 2001 she became the Director of Treaty, Lands and Resources. She began as a Researcher and helped with Elder interviews for the different Specific Claims and litigation.  Leah left TWN to go to UBC Law School full-time in 2010, after working for the people for 18 years.  She was called to the Bar in British Columbia in January 2015.  She has worked as a lawyer since then. She is married and has a lovely daughter. 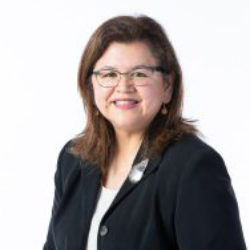